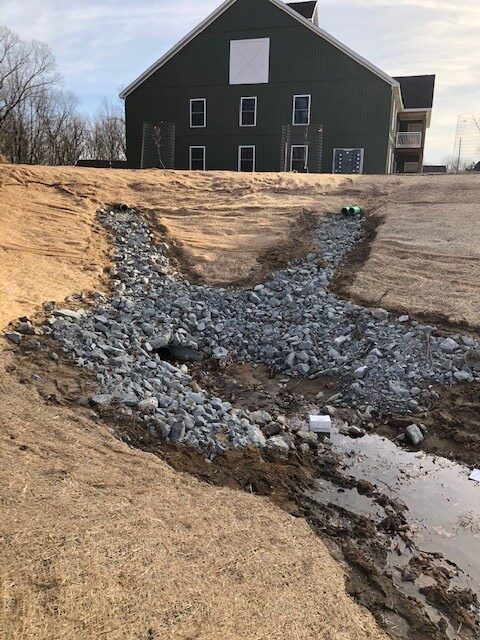 We were able to get a good start on the seeding at The Paddocks Apartments this month. Stabilization and seeding has been completed in both detention ponds, the various prairie areas have been seeded and 80% of the turf areas have been seeded. There are a few small areas that have not been cleared of supplies and where final fine grading has not been completed. These areas will be seeded this Spring when we get into the growing season again.

The ponds are working as projected, slowing runoff and filtering storm water before it enters the Town of Culver storm system. All of the new pavement is directed to the detention ponds and almost all of the downspouts are directed to the ponds. Downspouts that are not releasing water directly onto pavement are released into individual miniature drywells. These allow percolation into the surrounding soil in normal rains and each has a grate at the top allowing overflow into the surrounding landscape.

In the ponds themselves, riprap was installed at the storm water outlets to slow the water entering the pond. This was done with large pieces of rough shaped limestone which will help dissipate the energy of the water flow while spreading the flow and eliminating the concentration that often causes erosion.

As an educational component, the transitions between prairie and turf areas, bluebird houses are being installed. The new prairie areas will promote reestablishment of bluebirds in the area. Signs will be installed on the the birdhouse posts later this year. The signs will provide a little information about the sustainable landscape installation as well as a link to a website where visitors can find more information.

Because this is a development with the intention of promoting new families, we have provided significant areas of standard lawn for outside play. There will also be a natural playground and a community garden including two raised beds.

Before the seeding was placed, trees were planted throughout the site. 57 trees of multiple varieties were installed. Some were selected for future shade and other were selected to promote wildlife. We are still constantly visited by the deer from the adjacent woodlot. We don’t want to discourage their visits to the area, but we have installed fencing around the trees to try and protect them from predation until they are established.