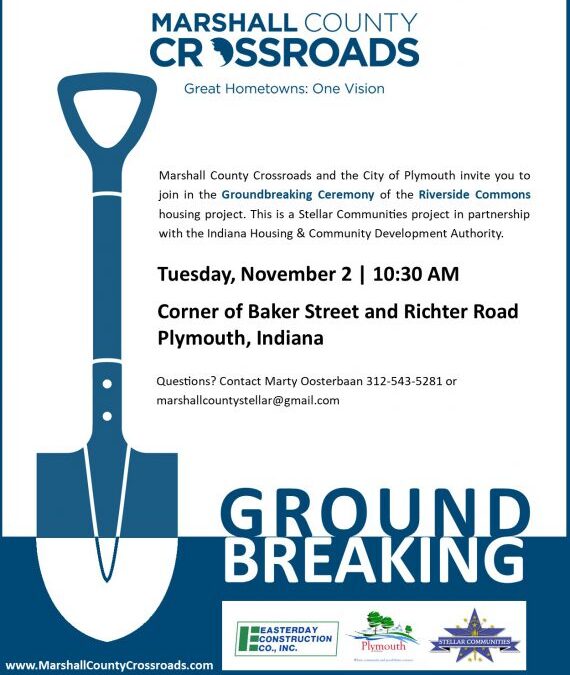 We had the ground breaking this morning for Riverside Commons Plymouth. This is part of the overall project that includes 40 units in Plymouth and 8 units in LaPaz.

Marty Oosterbahn took the lead on communications through Marshall County Crossroads. He kicked off the program with some remarks about the project. Mayor Mark Senter spoke on the importance of the project to the City of Plymouth. Then I (Kevin Berger) spoke representing Culver Sand Hill Farm LLC as the Developer and Easterday Construction Co., Inc. as the General Contractor. My remarks are below:

A lot goes into these projects. This project wouldn’t have been possible without the effort of the Marshall County Crossroads committee and their effort to achieve Stellar designation. Riverside Commons was one of 21 projects awarded out of 51 applicants. While we made every effort to be competitive, we would not have been successful without the Stellar Set-aside.

When we began talking about including a tax credit project in the Stellar application, I met with community leaders throughout the County, but it was the leaders in Plymouth and LaPaz that answered stepped up. They helped connect me with community minded property owners. They helped me move this through the review staff. They helped me obtain variances where necessary. I need to also thank the review staff for stepping up and helping expedite this project when obtaining permits became critical.

Along with the local support, I want to thank IHCDA for their guidance and support. Culver Sand Hill Farm was created to help Culver with their housing needs. IHCDA helped me as a new developer. We’ve been successful with that, bringing over 36 new residents to Culver with over 37 new children under 18 that will be students in the Culver School System. We have created new affordable housing attracting new residents to the community. We expect similar success here.

The tax credit financing for this project was facilitated by Adam LaVelle and his team at CREA. Thanks to Anne McKinley for helping me make that connection. CREA then was able to bring in First Farmers Bank & Trust for the construction loan and permanent financing. We’re pleased to have the local connection here. Thanks for Mike and Bruce with First Farmers for being here today.

We have been able to keep much of this work local, using Brent Martin with SRKM Architecture, Artisan Flooring, Thomas Excavating, Paul Hundt Concrete, Quality Drywall, A&M Home Services, Deford Kitchens and Banner Electric among others.

There are countless others that helped make this happen which I’m sure I’m forgetting, but I want to thank them anyway.